Neurontin is the trade name for Gabapentin.  Neurontin is not considered a drug of abuse but it can cause both physical and psychological dependence due to the alteration of GABA. [3] Doctors have raised concern about Neurontin's involvement in overdoses and Paul Earley, an addictionologist and board member of the American Society of Addiction Medicine has stated, "We need to rethink how we prescribe drugs we once assumed were safe."

It is critical to do a slow Neurontin taper, but dependence Neurontin places extreme demands on your body and nervous system. Point of Return implements slow reduction schedules and specifically designed nutraceuticals to support the body's unique needs during a Neurontin taper to reduce Neurontin withdrawal symptoms. Let our experts guide you on the correct taper rates, we have helped people all over the world and are hear to help you too.*

Below is information about Neurontin, Neurontin withdrawal, and how to stop taking Neurontin naturally.

NEURONTIN WITHDRAWAL HELP - gettING OFF NATURALLY

Our areas of expertise are Antidepressants, Benzodiazepines, Sleeping Pills and Painkillers on a case-by-case basis.  Our innovative approach to tapering encompasses a holistic method to empower you on your path to recovery. No need to go through Neurontin withdrawal alone, work with our Prescription Drug Experts.* 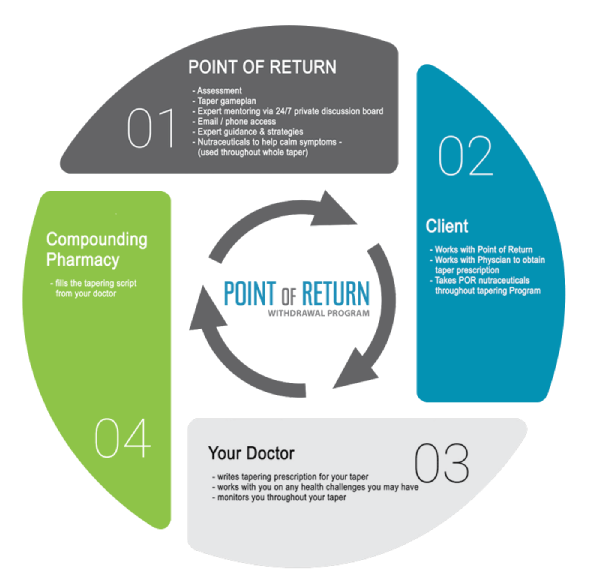 NEURONTIN WITHDRAWAL SYMPTOMS MAY INCLUDE

IMAGINE BEING FREE OF NEURONTIN DEPENDENCY

✔ Free Mentoring on our 24/7 private Discussion Board, email and phone I want to say there is hope for all of you who are going through a trial you feel will never end!  The Point of Return withdrawal program works! More...

Neurontin (Gabapentin) was discovered by Gerhard Satzinger for Parke-Davis’ German Labs while searching for a drug molecule that targeted GABA. GABA was known to be the targeted neurotransmitter for benzodiazepines but since it could not cross the blood brain barrier, Satzinger synthesized Gabapentin (Neurontin) by incorporating GABA into a ring that could pass from blood to brain.  Pfizer obtained Gabapentin in 2000. The drug was initially expected to make no more than $500,000 but by 2001 sales exceeded $1.2 billion.

Neurontin affects GABA, the most calming neurotransmitter of the human body and post marketing reports have shown there is a potential of abuse, dependency and withdrawal symptoms.  Pfizer does recognize that Gabapentin (Neurontin) can cause withdrawal symptoms and states, “ There are rare postmarketing reports of individuals experiencing withdrawal symptoms shortly after discontinuing higher than recommended doses of gabapentin used to treat illnesses for which the drug is not approved. Such symptoms included agitation, disorientation and confusion after suddenly discontinuing gabapentin that resolved after restarting gabapentin.”

The demand for Neurontin was limited since it was only approved for partial seizures, and Parke-Davis defrauded the government by encouraging doctors to write prescriptions for Neurontin for uses other than approved (off-label) and then seek Medicaid reimbursement.  While doctors can prescribe a drug for off-label uses, a drug company is not allowed to promote or market a prescription drug for a medical condition without first proving it is safe and effective to the FDA. The fine that Pfizer paid was the second largest in U.S. history.

Because Neurontin can cause feelings of calm, relaxation and euphoria, both tolerance to the drug and withdrawal symptoms can occur. Pregabalin is the EU version of Neurontin and in 2010 Pregalalin was listed as a new recreational psychoactive substance.

It is recommended to slowly taper Neurontin to minimize withdrawal symptoms.  Neurontin is often given for Benzodiazepine withdrawal and must be tapered in a similar manner.  Our nonprofit has been helping people safely withdraw from Neurontin for 15 years. We can also help you. “ I am proud of my accomplishment, completely and entirely due to you, your team and your withdrawal program”

NEURONTIN SIDE EFFECTS AND ADVERSE REACTIONS

NEURONTIN SIDE EFFECTS MAY INCLUDE:

NEURONTIN ADVERSE REACTIONS MAY INCLUDE: per PDR

In January 2008, the FDA alerted healthcare professionals of an increased risk of suicidal ideation and behavior in patients receiving anticonvulsants to treat epilepsy, psychiatric disorders, or other conditions (e.g., migraine, neuropathic pain). This alert followed an initial request by the FDA in March 2005 for manufacturers of marketed anticonvulsants to provide data from existing controlled clinical trials for analysis. Prior to this request, preliminary evidence had suggested a possible link between anticonvulsant use and suicidality. The primary analysis consisted of 199 placebo-controlled clinical studies with a total of 27,863 patients in drug treatment groups and 16,029 patients in placebo groups (>= 5 years of age). There were 4 completed suicides among patients in drug treatment groups versus none in the placebo groups. Patients receiving anticonvulsants had approximately twice the risk of suicidal behavior or ideation as patients receiving placebo (0.43% vs. 0.24%, respectively; RR 1.8, 95% CI: 1.2—2.7). The relative risk for suicidality was higher in patients with epilepsy compared to those with other conditions; however, the absolute risk differences were similar in trials for epilepsy and psychiatric indications. Age was not a determining factor. The increased risk of suicidal ideation and behavior was observed between 1 and 24 weeks after therapy initiation. However, a longer duration of therapy should not preclude the possibility of an association to the drug since most studies included in the analysis did not continue beyond 24 weeks. Data were analyzed from drugs with adequately designed clinical trials including carbamazepine, felbamate, gabapentin, lamotrigine, levetiracetam, oxcarbazepine, pregabalin, tiagabine, topiramate, valproate, and zonisamide. However, this is considered to be a class effect. All patients beginning treatment with anticonvulsants or currently receiving such treatment should be closely monitored for emerging or worsening depression or suicidal thoughts/behavior. Patients and caregivers should be informed of the increased risk of suicidal thoughts and behaviors and should be advised to immediately report the emergence or worsening of depression, the emergence of suicidal thoughts or behavior, thoughts of self-harm, or other unusual changes in mood or behavior. Anticonvulsants should be prescribed in the smallest quantity consistent with good patient management in order to reduce the risk of overdose.

PubMed.gov has documented cases of Gabapentin withdrawal and had this conclusion:

Neurontin (Gabapentin) is widely utilized currently for the chronic treatment of recalcitrant migraines, bipolar illness, pain, and epilepsy. It has a wide therapeutic index with few side effects and drug interactions, is not hepatically metabolized, and is excreted by the kidneys. Past reports have suggested that some withdrawal symptoms can present after 1-2 days upon abrupt discontinuation of Neurontin (Gabapentin) after chronic use within young to middle-aged patients. These symptoms mimic that of alcohol and benzodiazepine withdrawal purportedly due to a similar mechanism of action. Unique to this case is that this geriatric patient developed debilitating withdrawal symptoms after a gradual, week-long taper of Neurontin (Gabapentin) along with flu-like symptoms. It is proposed herein that a Neurontin (Gabapentin) taper should follow a course similar to that of a benzodiazepine taper -- slowly and over a period of weeks to months.